Rosslyn Chapel is a unique 15th century chapel on the outskirts of Edinburgh. The historic site of Rosslyn is a must-see on your Scottish Tour. Kings & Queens, poets and artists have been frequent visitors through the centuries. Rosslyn Chapel's original design was on a grander scale.The intention was for the Chapel to be visible from miles around. The family's vision never reached that grand scale.This takes nothing away from the incredible architecture. Rosslyn Chapel is an unforgettable stop on a tour of Scotland.
Book or enquire now 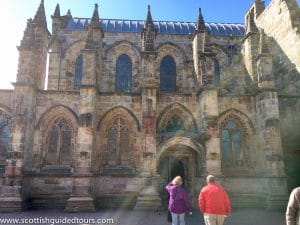 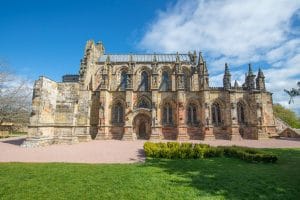 Dan Browns “Da Vinci Code” brings Rosslyn Chapel to prominence in more modern times. The surge in visitor numbers due to the best selling book is the “miracle of Rosslyn”

Rosslyn Chapel was almost lost. Thanks to the Rosslyn Trust and the restoration work continues.
We ensure you enjoy ample time on your private tour to admire the stone masonry work and detail of the Chapel.
Mystery and legend are all part of Rosslyn Chapels history.
Join us and add Rosslyn Chapel to your tour.
Queen Victoria could not believe the dilapidated state of the chapel on a visit in 1842.
She “encouraged” the Earl of Rosslyn to save the by now crumbling sandstone chapel for the nation. Rosslyn Chapel survived the violence and terrible destruction of the 1500s.
Oliver Cromwell used the chapel to stable horses in 1650. Rosslyn Chapel remained unharmed but as the centuries past, Rosslyn was being defeated. Not by human hand but by the Scottish weather. The chapel once so loved and admired was by now windowless. Crumbling and battered by blizzards and howling gales ( normal Scottish Summer weather
Conservation continues and our Rosslyn Chapel Tour is an outstanding addition to your Scotland travels.
Rosslyn is once more admired and restored.
Contact us
Book or Enquire Now

“Scottish Guided Tours was an exceptional experience that did not disappoint. Each tour (we’ve done more than one) is a journey into Scotland’s history with engaging guides that will entertain you with bygone days and current events at each destination. There is plenty of time to explore. This was very important to us as we did not want to see Scotland from a bus window. We wanted to get out, put our boots on the ground and be in it, and that we did. The day will fly by with fun, laughter, history and enjoying some the most beautiful places on earth. Singles, families, or groups, Scottish Guided Tours is a must! Very highly recommended.”

HBNLA
“Don’t often write reviews but felt the need to for our trip. We live in Spain and decided on a little trip back to the motherland, we were not disappointed and our trip was made even better by Niall, his knowledge and passion for his country and what he does is evident, not your bog standard repetitive tour guide, there was not one day of our trip that he didn’t have us laughing. Can highly recommend Scottish guided tours, we will return and when we do, we will definitely be booking with Niall.”